The riding breeches worn by jockey Michelle Payne when she rode Prince of Penzance to a historic win in the 2015 Melbourne Cup, have been acquired by the National Museum of Australia in Canberra.

Michelle Payne became a national icon as the first female jockey to win the Melbourne Cup in its 155–year history, after riding to victory last year – at odds of 100 to 1. 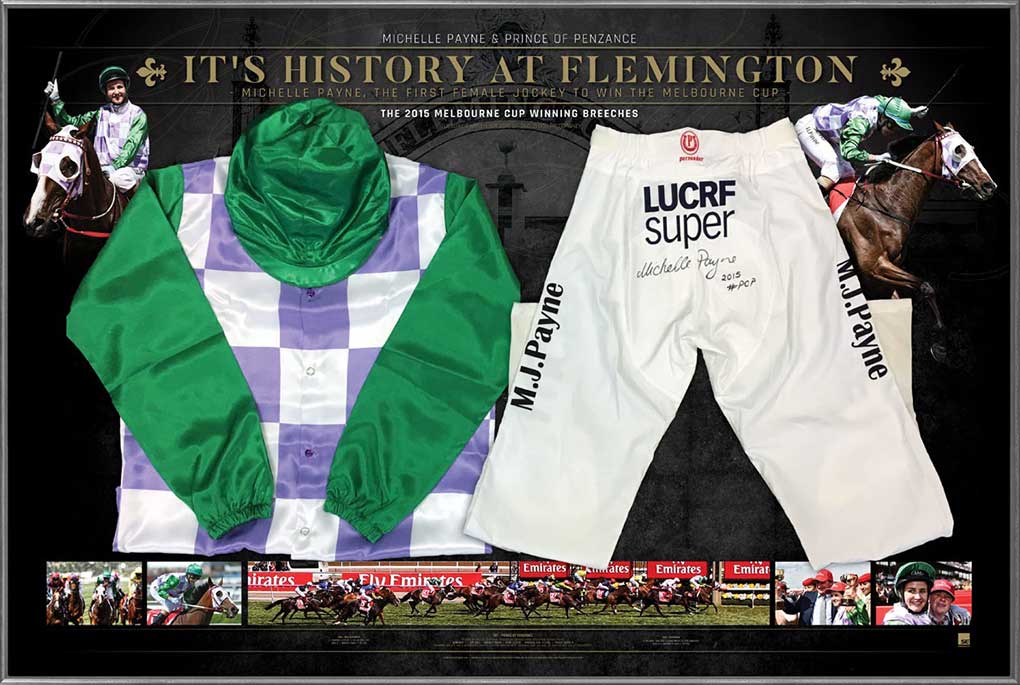 Signed ‘Michelle Payne / 2015 / # POP’, the breeches she wore on that day were auctioned at a fundraising event for injured jockeys held by the National Jockeys Trust, at the traditional Melbourne Cup eve ‘Call of the Card’ event in Melbourne.

The breeches are set in a frame alongside a replica set of Prince of Penzance jockey colours.

‘Michelle Payne made history and won hearts across the country when she became the first woman to win the Melbourne Cup in 2015 and we are delighted to acquire her riding breeches from that day, to enable us to share this uplifting story with the nation,’ said National Museum director, Dr Mathew Trinca.

‘The Melbourne Cup captivates the nation and the riding breeches are a wonderful addition to our Melbourne Cup collection which includes Phar Lap’s heart and the oldest intact Melbourne Cup, from 1866,’ said National Museum curator, Jennifer Wilson.

A permanent display on the history of the Melbourne Cup is part of the Museum’s Landmarks gallery.

In her famous post-race interview, Ms Payne said she had succeeded in a chauvinistic sport and thanked those who had believed in her: ‘I just wanted to say that everyone else get stuffed, because they think women aren’t strong enough but we just beat the world.’

The Prince of Penzance jockey colours of purple, white and green — worn by Ms Payne – are coincidentally the same as those worn by the Suffragettes, who campaigned in England for women’s right to vote, further highlighting women’s participation in horseracing.

Ms Payne comes from a family of 10 children, seven of whom are professional jockeys. Her brother Stephen was the strapper for Prince of Penzance and drew the horse’s number one barrier.

Ms Payne donated the breeches to the National Jockeys Trust, which received 100 per cent of the proceeds of the auction. Ms Payne has been seriously injured several times herself, including a life-threatening fall at Mildura in May this year.