National Museum celebrates 50,000th visit to ‘A History of the World in 100 Objects’

Exhibition the Museum’s most popular to date

The National Museum of Australia in Canberra today marked the 50,000th visit to its blockbuster exhibition A History of the World in 100 Objects from the British Museum.

After opening to the public some six weeks ago, the exhibition featuring unique treasures from the British Museum’s collection, looks set to be the National Museum’s most popular to date.

In its only east coast venue, A History of the World in 100 Objects uses items from around the globe to explore the last two million years of human history, sourcing the oldest objects from the British Museum’s collection and incorporating those from the present day. 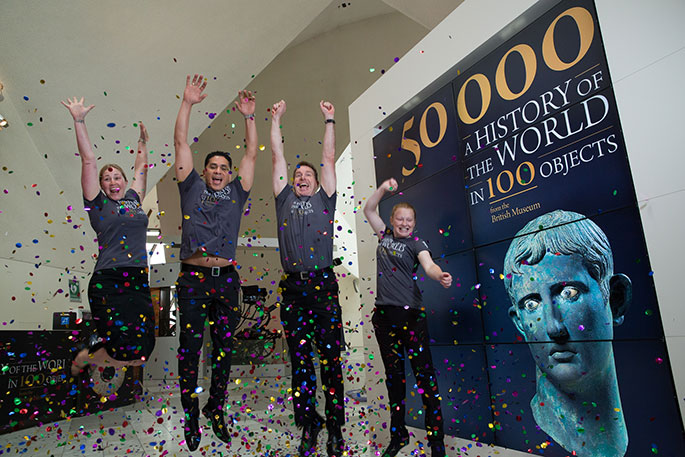 ‘We are delighted to celebrate the 50,000th visit to A History of the World in 100 Objects and look forward to welcoming many more guests over the coming months,′ said National Museum director, Dr Mathew Trinca.

‘The fact that this exhibition is resonating so strongly with audiences is a reflection of the beauty of the objects and the power of the stories they tell — I urge Australians to see this show,’ said Dr Trinca.

The next closest performing exhibition over the same time-period was 2011’s Not Just Ned, which attracted some 26,000 visitors over a six-week period. In terms of total ‘exhibition-life’ figures, A History of the World in 100 Objects is on track to exceed the Museum’s most popular exhibition — the 2010 Yiwarra Kuju: The Canning Stock Route show, which clocked some 122,000 visits.

From stone to gold, clay to plastic, the exhibition traces human experience through objects people have made, including a 1.6 metre tall Assyrian relief; the famous Assyrian clay flood tablet (from modern Iraq) inscribed with the story of a great flood and an ark; and a small, but exquisite, gold llama from Peru.

An African stone-chopping tool that is one of the first known human made implements and the endearing Lewis chessmen (which found fresh fame following their inclusion in the 2001 film adaptation of Harry Potter and the Philosopher’s Stone), are among the huge range of objects on show.

Exclusive to the Australian tour is the bronze head of Augustus from Meroë, which is one of the most important surviving portraits of Rome’s first emperor.

The National Museum chose to include a 101st object representing a globally recognised Australian innovation. The CSIRO WLAN test bed (the precursor to modern wi-fi) is the exhibition’s 101st object.

The presentation of this exhibition is a collaboration between the British Museum, the Western Australian Museum and the National Museum of Australia.