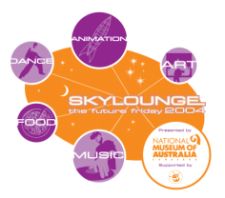 Forget the usual Friday nights this February, when the National Museum brings together a top lineup of musicians, animators and young artists to imagine the future at Sky Lounge 2004.

In a first for the annual new media festival, the best slideshows by artists judged in a national competition will be projected on a huge white wall in the Museum's Garden of Australian Dreams.

Punters will also experience a new program every week of the world's best animated films. Compiled by Malcolm Turner from Melbourne's Animation Posse, the program starts on 6 February with the screening of Academy Award winning film, The Chubb Chubbs.

And then there's the music! Riding on the success of last year's sellout crowds, the Museum's Garden will be transformed by a music program complementing four distinctive colour themes:

"Sky Lounge brings a future world of new media to the National Museum, opening us up to a younger audience," said Sky Lounge coordinator Jodie Cunningham. "The National Museum tells the stories of all Australians — and Sky Lounge gives young people a chance to express themselves by showing their work as part of a multimedia extravaganza."

A big screen will show the animated films and Melbourne's Citylights have created a special lightbox gallery of works collected from and shown on the streets.

The tunnel of the Garden of Australian Dreams features HyperSense Complex, three performers plugged into a laptop network with sensors worn on their bodies, creating complex improvised sound pieces. Interactive and linear new media art by students from the Australian National University's Centre for New Media Arts and the University of Canberra will also be on show.

Sky Lounge kicks off at 8.30pm each night, with animated films from 9.30pm. Tickets are $20 adult, $15 conc and are available at the Museum, Stocks stores across Canberra or by phoning 02 6208 5021. Check out the Sky Lounge website: www.nma.gov.au/skylounge