Petitions were an effective way of mobilising support for Indigenous civil rights, and were used throughout the period leading up to the 1967 Referendum. The Aboriginal-Australian Fellowship ran a petition campaign in 1957 which was launched at a huge meeting in the Sydney Town Hall on 29 April that year. 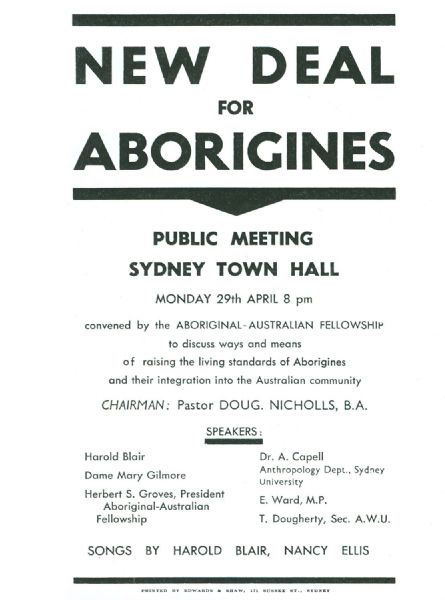 This petition was the brainchild of Jessie Street, who had drawn it up with Brian Fitzpatrick of the Council for Civil Liberties and lawyer Christian Jollie-Smith. 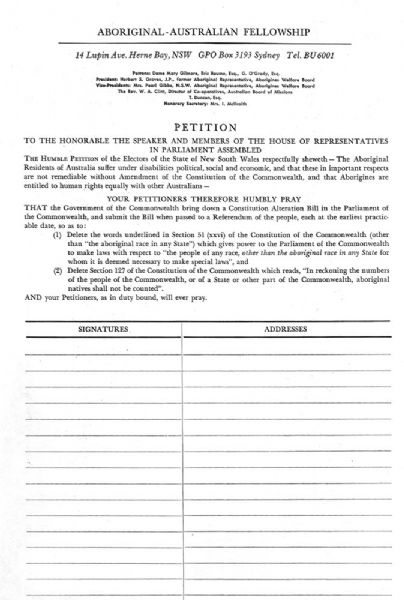 Jessie Street persuaded Faith Bandler, Pearl Gibbs and other members of the Aboriginal-Australian Fellowship that the Town Hall meeting they had arranged to draw attention to Aboriginal disadvantage was the perfect place to launch the petition.

The petition began by drawing attention to the fact that the 'Aboriginal Residents of Australia suffer under disabilities, political, social and economic' and argued that the situation could not be remedied 'without Amendment of the Constitution'. The first of these petitions was presented to the House of Representatives by Labor MHR Leslie Haylen on 14 May 1957.

The next year a petition by the newly formed Federal Council for Aboriginal Advancement was framed in similar language, although it was more carefully worded. It was signed by more than 25,000 people in three months and tabled in the House of Representatives by Gordon Bryant on 17 September 1958. Further petition forms were tabled by other Labor Party members later in the month. 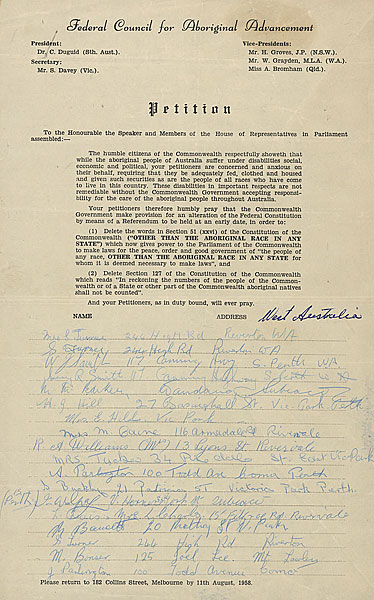 Both petitions called for the amendment of section 51 (xxvi) and the repeal of section 127 of Australia's Constitution, which required a national referendum.

Why focus on the Constitution?

The only references to Aboriginal Australians in the Australian Constitution were negative. Section 51 (xxvi) stated that:

The Parliament shall, subject to the Constitution, have power to make laws for the peace, order and good government of the Commonwealth with respect to the people of any race other than the aboriginal race in any State, for whom it is deemed necessary to make special laws. [1]

Campaigners wanted the phrase 'other than the aboriginal race' to be deleted so that the Commonwealth could pass special laws to assist Aboriginal Australians as a people.

The second reference was section 127 which held that:

They wanted this section to be repealed, arguing that it was an affront for Aboriginal Australians to be specifically excluded by the Constitution.

Section 109 of the Constitution was also relevant to the issue. It read:

When a law of a State is inconsistent with a law of the Commonwealth the latter shall prevail, and the former shall, to the extent of the inconsistency, be invalid.

Reformers believed that if the Commonwealth had the power to pass special legislation to assist Aboriginal Australians and used this power, state laws (such as those operating in Queensland) could be challenged under section 109.