For white civil rights activists in the 1960s equal pay was the basic marker of acceptance and social inclusion in Australian society.

Shirley Andrews, who helped establish the Equal Wages for Aborigines committee, pointed out that people who were paid such a small proportion of the basic wage were not able to live like white people, as required under the assimilation policy.

Aboriginal workers had concerns other than wages. For example the Gurindji pastoral workers were unhappy about their appalling living conditions: a diet of salt beef, damper, sugar and tea, and white stockmen coming back into camp when the Aboriginal stockmen were still out with the cattle, and taking advantage of Aboriginal women.

In 1968 the Conciliation and Arbitration Commission ruling on equal wages in the cattle industry came into force.

When the case was being heard in 1966 the Commission accepted the employers' evidence that 'many of them expect[ed] to change over to white labour if Aborigines are to be paid at award rates'. This did happen and many Aboriginal stockmen faced unemployment for the first time.

The achievement of equal wages in the pastoral industry thus turned out, for many, to be a hollow victory. Families and whole communities were turned off properties where they had worked for generations. People drifted into towns and were given 'sit down' money (unemployment benefits). They were no longer able to fulfil obligations to their country.

Background to the case

In 1964 the North Australian Workers Union presented a case for equal wages for Aboriginal pastoral workers.

The cattle industry, the largest employer of Aboriginal labour, was not legally required to pay Northern Territory Aboriginal drovers more than £3.3.3 per week. White drovers got five times this amount. The North Australian Workers Union case before the Conciliation and Arbitration Commission would, if successful, end this discrimination.

Two years earlier the Electoral Act had extended voting rights to Aboriginal people, but industrially they were still outside the award structure which guaranteed fair wages to workers.

The Australian industrial system, built up over more than half a century, also laid down working conditions, annual and sick leave and workers' compensation. Aboriginal workers, however, were specifically excluded from awards in jobs where they were most represented, such as in the pastoral industry.

Shirley Andrews and Barry Christophers, who formed the Equal Wages for Aborigines Committee, pointed out that notions of equality were hollow unless they were reflected in the pay packet. In 1963 they began campaigning for wage equality for Aboriginal workers.

At a public lecture in Melbourne in January 1965, Andrews remembered her sense of outrage when she heard of cases of labour exploitation:

Two very fine young Aboriginal stockmen were present at a conference I attended in Cairns in December, 1962. These young men were both about 25 years of age and had worked on a cattle station out from Coen in Northern Queensland since they were ten years old. They were now skilled stockmen and should have had a considerable amount of money in their trust funds. The only cash money they had ever received consisted of five pounds at Christmas and five pounds for the big local race meeting.

At the 1962 Federal Council for Aboriginal Advancement (FCAA) conference, Shirley Andrews gave a powerful address setting out the facts on wage discrimination and arguing that trade unionists had a responsibility to get involved in campaigns to bring Aboriginal workers under the award system, which guaranteed a fair wage.

The next year, Andrews and others lobbied Australian Council of Trade Union (ACTU) delegates, and the ACTU put out a policy position announcing 'there must be an end to wage discrimination'.

The next step in the consciousness-raising campaign was a leaflet titled 'The facts on wage discrimination', which pointed out that Aboriginal workers, the backbone of the pastoral industry, were specifically excluded from most pastoral awards across the country.

Thirty-two thousand copies of this leaflet — with a photo of Aboriginal men walking straight and tall in the Darwin May Day march — were distributed to unions and other members of the public.

The North Australian Workers Union application to vary the Cattle Station Industry (Northern Territory) Award 1951 to include Aboriginal pastoral workers was the first of three such awards to come before the Conciliation and Arbitration Commission in 1965. In a widely distributed flyer it set out the case for including Aboriginal cattlemen in the award.

This application was a test case. The majority of the 2500 pastoral workers, classified as wards under the Northern Territory Ordinance, were paid no more than £3.3.3 per week.

The Equal Wages Committee opened its petition campaign with newspaper advertisements asking the public 'How equal is an Aborigine on £3.3.3 per week?' It pointed out that these low wage rates were inconsistent with stated policy that Aborigines should enjoy the same rights and privileges as other Australians.

In winter 1965 the Conciliation and Arbitration Commission heard evidence on the case in Alice Springs.

Marjorie Broadbent, Equal Wages for Aborigines Committee treasurer, and a member of the Miscellaneous Workers' Union, travelled to Alice Springs to hear the arguments put by pastoralists and unionists and to encourage Aboriginal people to attend the hearings. No Aboriginal evidence was heard. Broadbent recalls:

And so — anyway the court case went on and I can't remember the name of the advocate for the Aboriginal people — Wood something. He was very good. And it was a tremendous battle. But I was sitting in the body of the court surrounded by Aboriginal people and they were angry. They were very angry. There was a murmur going up when the evidence was given that they were cruel to horses. It was — it just had been an appalling life. Many of them had just worked temporarily on these holdings and then came back. They were just told, 'right oh, bugger off!'. And they just had to leave, having received no wages at all. Go in the clothes you're standing up in and then walk home. No other worker in Australia had such conditions. Even the women who got half pay. Was disgraceful!

In March 1966 the commission brought down its long-awaited decision on the proposed variations to the Cattle Station Industry (Northern Territory) Award. It agreed to the deletion of the clauses which excluded Aboriginal pastoral workers from the award but deferred the date of implementation to 1 December 1968.

The commission's judgment explained that this was to give Aboriginal workers and the Commonwealth 'time to prepare' for the change. It added, ominously, that it was also necessary 'to give the pastoralists an opportunity to consider the future of their aboriginal employees and to make arrangements for their replacement by white labour if necessary'.

The Equal Wages Committee welcomed the removal of the discriminatory wording but found the judgment wanting on four counts.

The Equal Wages Committee held that if such a clause was to be accepted by the Arbitration and Conciliation Commission as applicable to the industry it could be used on cultural grounds, thus discriminating against Aboriginal pastoral workers en masse.

The North Australian Workers Union held that an important union principle was at stake and that the union movement could not allow the use of a pool of cheap labour.

The news of the deferred implementation among Aboriginal pastoral communities in the Northern Territory seemed to be the last straw.

News of this strike spread and in August 1966 Vincent Lingiari, head stockman at Wave Hill, south of Darwin, one of the largest pastoral leases in the Territory, owned by the wealthy British Vestey family, also led 200 workers and their families in a walk-off.

They set up camp at Dagaragu (Wattie Creek). The Federal Council for the Advancement of Aborigines and Torres Strait Islanders (FCAATSI) supported these walk offs and encouraged public donations to help the striking families. The Meatworkers' Union placed a black ban on Vestey's meat.

They urged sympathisers to assist the striking workers and money, food and blankets flowed in to the Equal Wages Committee. 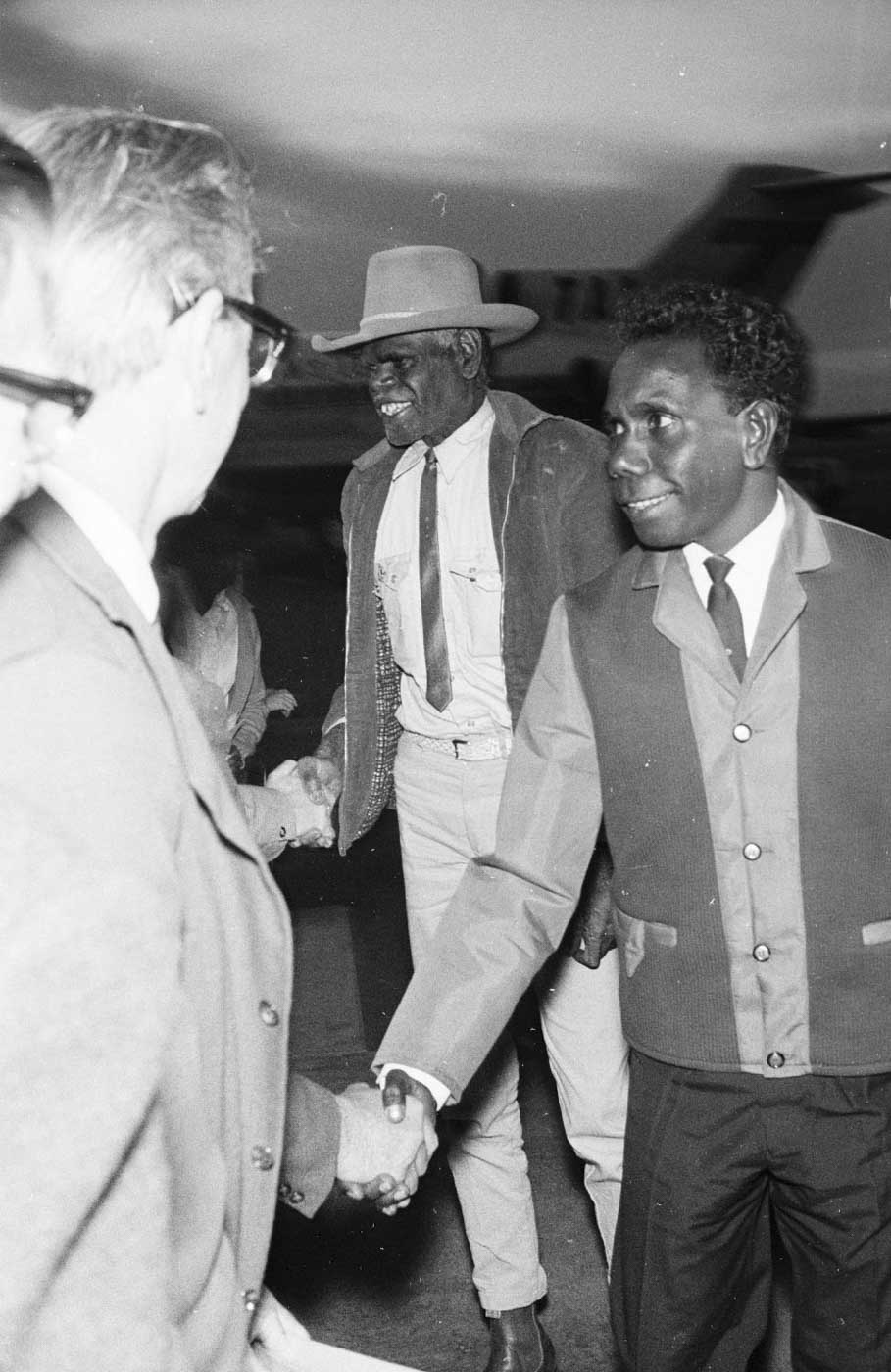 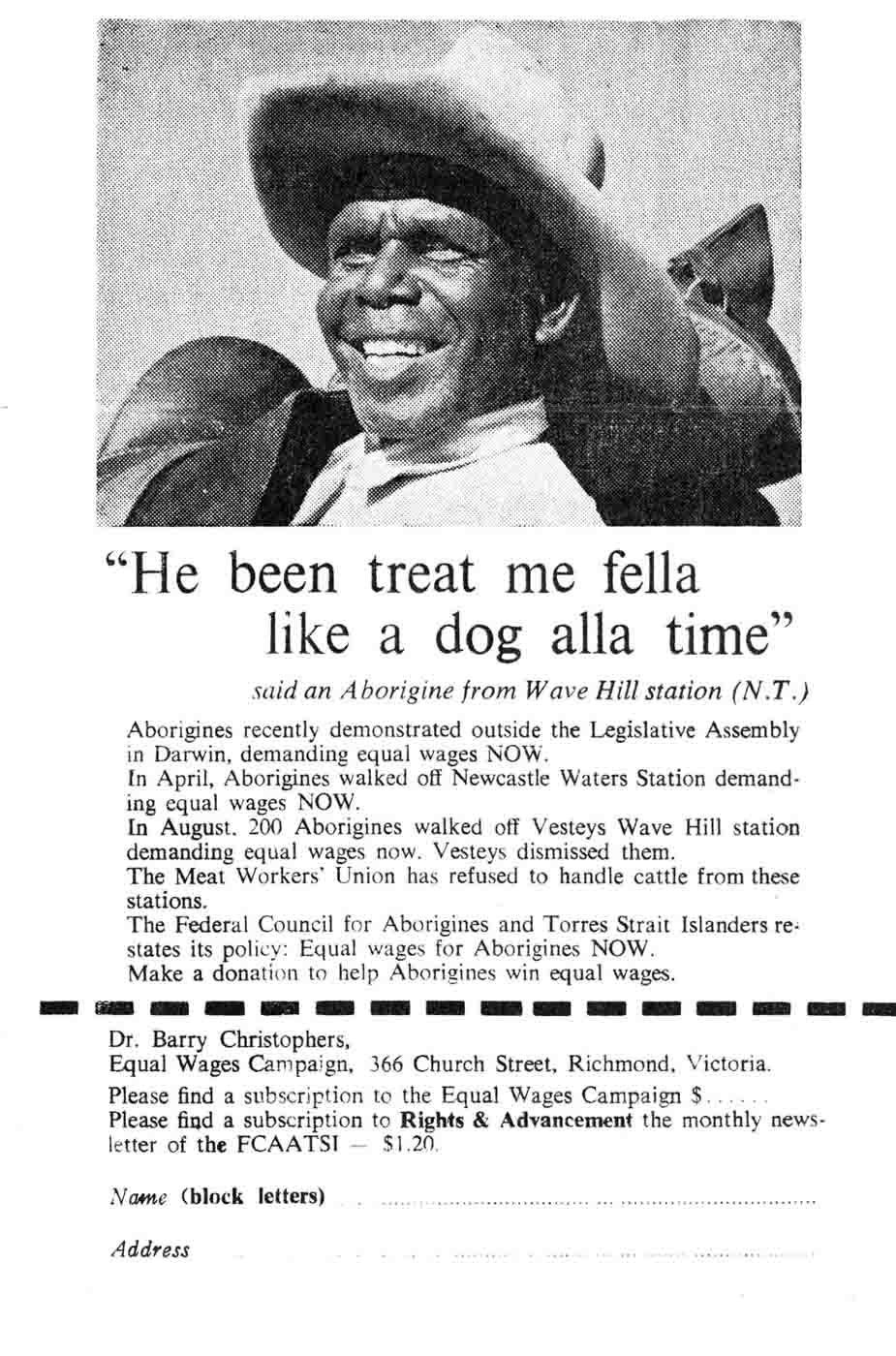 Daniels and Major (Lupna Giari) travelled to Sydney to tell southern unionists of the appalling working conditions and pay.

This leaflet was circulated following the Arbitration Commission's judgment in favour of equal wages, which could be deferred for three years. Readers were invited to contribute money to the campaign supporting the strikers.

The Equal Wages Committee of FCAATSI produced another leaflet, which it disseminated widely, asking for support — moral and financial — for the striking Aboriginal pastoral workers. Money flowed in to support them.

The walk off, initially described as a strike, was clearly about more than wages. Men working in the industry drew attention to appalling living conditions, poor quality food and abuse of their women by white workers.

At Wave Hill they also drew attention to the fact that they were working on Gurindji land, the land of their forebears. The dispute widened and deepened. It became a claim for land.

This story is continued in the Land section of this site: The Wave Hill Walk Off.