Singing the past into the future 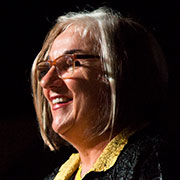 In a cave in Central Australia, a camera crew is painstakingly filming Anangu rock art at Cave Hill. As they film, senior custodian and Pitjantjatjara elder Stanley Douglas narrates the story of the Seven Sisters.

Seldom photographed, these images depict the events at this site that form part of the epic saga now known as the Seven Sisters songlines, or Dreaming tracks.  A major exhibition on the Seven Sisters opens at the National Museum of Australia in Canberra in September 2017.

Visitors will stand under one of the world’s highest-resolution domes and be literally immersed in the story.

This large, six-metre spherical dome will immerse visitors in a planetarium-style experience of a higher order: participants will experience both the cosmological and terrestrial dimensions of the Seven Sisters’ story with its religious and spiritual overtones.

The Seven Sisters songlines are considered the most extensive of the creation tracks that criss-cross Australia. The story can also be seen in the night sky in the Pleaides star cluster and the Orion constellation. Countries including Ireland and Japan have their own ‘seven sisters’ stories.

Until recently, the part of the Seven Sisters story held on the walls of Cave Hill has only been seen by a few visitors, always in the company of custodians. With a sense of urgency, the Anangu people have chosen to digitise and share the Seven Sisters songlines for compelling preservation and heritage reasons.

Anangu elders feared that their young people were too distracted by other technological wonders of the 21st century to be receptive to back-to-country trips to receive the knowledge. These elders decided to capitalise on the younger generation’s love of new technology by engaging them digitally in their culture.

Digital tools to create stories from the past

The project capturing the Seven Sisters songline at Cave Hill is a partnership between the National Museum and Professor Sarah Kenderdine of the University of New South Wales, in consultation with nine community councils across Anangu, Pitjantjatjara and Yankunytjatjara (APY) lands.

Previously Kenderdine worked on the Mogao Caves world heritage site in China, filming Buddhist murals in 3D. These images were stitched together to form an immersive 360-degree experience at the Art Gallery of NSW that includes animated sequences of musicians and dancers performing the sutras shown in the murals.

As Kenderdine recently told an audience at the National Museum, ‘We are living in a world where digital tools have become vital for us to be able to create stories from the past’.