Papunya Painting: Out of the Australian Desert was on show at the National Art Museum of China, Beijing from 10 June until 26 August 2010.

During the 1970s and early 1980s Aboriginal artists from Australia's Central and Western Desert regions created artworks that transformed understandings of Aboriginal art. On canvases, boards and whatever materials they could find, these artists boldly experimented with colour and style in the telling of their sacred Dreaming stories. This exhibition highlighted the National Museum of Australia's extraordinary collection of these paintings.

Some of the artists and their works

The Dreaming: The sacred stories of sacred ancestors

Many of the paintings in this exhibition tell stories of the activities of sacred ancestral beings. Aboriginal people refer to these collectively as 'the Dreaming'.

In the Dreaming the great ancestral beings created the world through their actions. In creating the world they left their spiritual presence in the features of the land — a presence that is still there today. So, for Aboriginal people, the Dreaming exists in both the past and the present.

When Aboriginal people travel their country today they see the hills, trees, animals and plants — everything — as the living embodiment of the sacred ancestral beings of the Dreaming.

Some of the Papunya paintings bought by the Aboriginal Arts Board were lent or given to Australian embassies around the world. Others were donated to public museums and galleries in Australia and overseas. These gifts helped to raise the profile of Aboriginal art in the commercial art market.

The Aboriginal Arts Board also purchased paintings for display in travelling exhibitions, which toured Africa, Canada, Indonesia, Japan, New Zealand, the United Kingdom and the United States between 1973 and 1981. In the 1980s the Board wound up its exhibition program and, in 1990, the historic collection of Papunya paintings was transferred to the National Museum of Australia.

Papunya lies close to the Tropic of Capricorn, in the far southwest corner of Australia's Northern Territory. The settlement is 240 kilometres northwest of Alice Springs. This map shows sites of significance in the area. 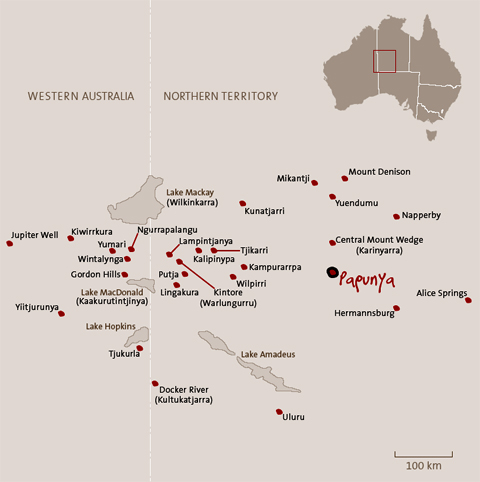 A travelling exhibition developed and presented by the National Museum of Australia.

A travelling exhibition developed and presented by the National Museum of Australia.